By keeping these tips in mind, you can use upselling to increase sales and profits at your bar or restaurant

TROUBLED WATERS
The importance of water as a natural resource can’t be understated. Wars and lesser skirmishes have been fought over water, and it’s been at the heart of numerous public utility projects and significant legislation at all levels of government.
In addition to being the world’s most popular beverage, clean water is crucial to restaurants, whether it’s used in the front or back of the house or even outside the facility.
The importance of H2O became particularly clear this year due to several major developments in different parts of the United States. As the ongoing drought in the West and Southwest takes its toll, land and crops—which are also impacted by the quality of water—are starving to death, leading to higher food prices and, ultimately, less food. Between the lack of rain and other disasters, such as the chemical spill that shut down the capital of West Virginia in January 2013, restaurants and municipalities are looking to conserve, filter, and even reuse water.
“All utilities are very important for us, but none is as essential as good water,” says Christian Fischer, executive chef and vice president of culinary innovations for Chartwells Higher Education Dining Services, based in Rye, New York. He says water is equitable to treasure at many of the 260 academic institutions for which the company manages foodservice operations. “Some of them refer to water as liquid gold.”
Extreme drought conditions hit central and northern California and western Nevada, and continue to impact many regions already suffering, like northern Texas and Oklahoma.
This has impacted crop production and cattle ranching, pushing food prices higher. The West has been in drought conditions for the past several years, but “the intensity is particularly great this year in California and the Southwest into Texas and Oklahoma,” says Liz Purchia, spokeswoman for the U.S. Environmental Protection Agency.
Restaurants should consider water conservation all the time, not just when there are crises, says Michael Oshman, founder and chief executive of the Green Restaurant Association, adding that the practice also saves money.
Energy Star dishwashers and ice machines conserve water in the back of the house, as do low-flow, pre-rinse spray valves and automatic on-and-off faucets. In the bathrooms, aerators on faucets, low-water toilets, and no-water urinals can save water.
At Atlanta’s Lure seafood restaurant, owner Fifth Group Restaurants constructed a system that not only harvests rainwater from the eatery’s roof and patio, but also melts water from icemakers and water condensation from air conditioning. The system stores up to 3,000 gallons of filtered water that is used for the bathrooms and to irrigate plants around the building.
“We’ve captured about 100,000 gallons each of the past two years, and haven’t had to use municipal water for flushing toilets or for irrigation,” says Steve Simon, one of Fifth Group’s partners. The main reason for making the expensive investment in the water recapturing system was environmental, but it has saved the restaurant thousands of dollars by not purchasing Atlanta municipal water, which Simon calls one of the most expensive water options in the nation.
When it comes to cooking, water’s properties also influence the taste of the food, and that is why a number of chefs work only with filtered water.
“It isn’t crucial when you’re braising a piece of meat, but it’s very important in baking and in delicate soups and sauces,” says Fischer, Chartwells’ executive chef. “If you have water with a strong chlorine taste, for instance, it will affect the final product. Other chemicals and metals can influence the flavor, too.”
A study in 2013 by The NPD Group found that 37 percent of restaurant customers choose water or no beverage with their meals. And bottled water is the choice of many guests, with 38 percent of restaurants offering it, according to Datassential MenuTrends.
But aqua is often taken for granted by customers, and the cost of water is rising. According to a study by Circle of Blue, a group of scientists and journalists concerned with natural resources, the average price of municipal water is up 6.2 percent in big American cities this year, and has jumped 33 percent since 2010.
Water grows the country’s crops, keeps the farms in the farm-to-table movement solvent, filters America’s beloved soft drinks, is critical for food prep, and cleans restaurants, keeping them functional. How restaurants and society treat water now will impact the world’s most precious resource for generations to come.

Email ThisBlogThis!Share to TwitterShare to FacebookShare to Pinterest
Labels: Protect your business, Safety 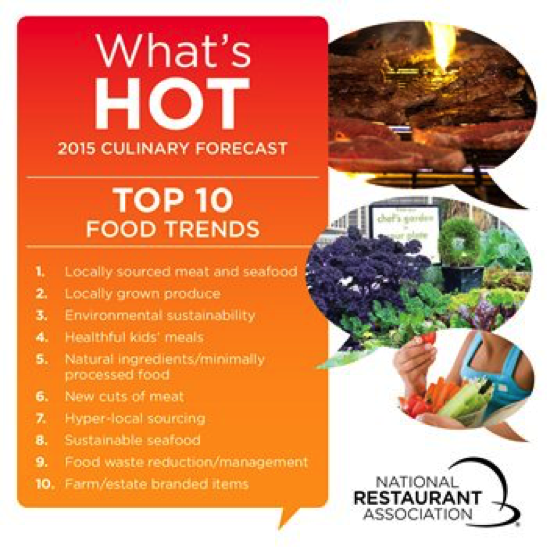 The NRA surveyed nearly 1,300 professional chefs – members of the American Culinary Federation (ACF) – to find which foods, cuisines, beverages and culinary themes will be hot trends on restaurant menus in 2015.

“As consumers today increasingly incorporate restaurants into their daily lives, they want to be able to follow their personal preferences and philosophies no matter where or how they choose to dine,” said Hudson Riehle, senior vice president of research for the National Restaurant Association. “So, it’s only natural that culinary themes like local sourcing, sustainability and nutrition top our list of menu trends for 2015. Those concepts are wider lifestyle choices for many Americans in other aspects of their lives that also translate into the food space.”

“Chefs are committed to supporting their communities and helping make responsible food choices,” said Thomas Macrina, CEC, CCA, AAC, national president of the American Culinary Federation. “I am pleased that members of the American Culinary Federation continue to support local sourcing and sustainable food practices as an annual trend and are paving the way for these values to become part of everyday American cooking.”

When asked which current food trend will be the hottest menu trends 10 years from now, environmental sustainability topped the list, followed by local sourcing, nutrition and ethnic cuisines and flavors.

The chefs were also asked how they feel about customers taking photos of their food and posting on social media during their meals. Nearly three in five chefs said it's free advertising and should be encouraged, and about a third said it's fine as long as they're discrete. Only one in 10 chefs said it's disruptive and should be discouraged.

Welcome to our blog. We believe that providing the right insurance starts with an in-depth understanding of its customers' businesses.

Check back weekly for updates

Have questions send us an Email.